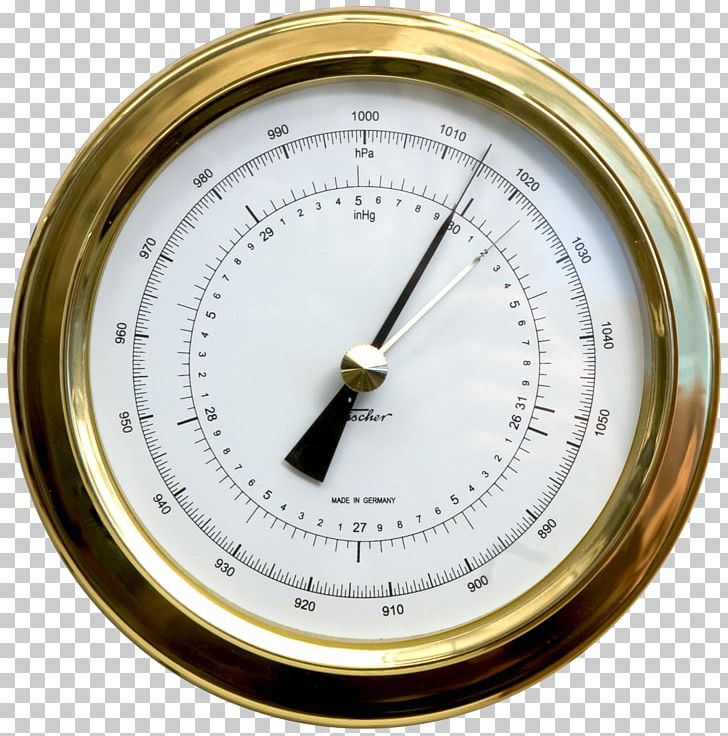 Some Useful video clippings to understand the working of Aneroid Barometer

Working principle of Aneroid barometer with a labelled diagram

An aneroid barometer is an instrument used to measure atmospheric pressure. The name “ANEROID” itself means ‘without water’ , that gives clear indication that there is no involvement of liquid.

An aneroid barometer consists of one (or more) thin metal capsules with round corrugated faces. Most of the air has been sucked out of the capsule leaving a partial vacum inside so that an increase in the external air pressure will compress the faces towards each other. They are prevented from collapsing together by a strong spring that is fixed to the instrument base. One face of the capsule is fixed firmly so that the other side flexes in and out with small changes in air pressure. This movement of one face is transmitted to a pointer by a system of levers and a chain wound round a spindle.

Construction & Working:
Its construction includes a thin metal chamber which is sealed but having partial vacuum inside. This chamber is fitted with certain levers and spring mechanism to which a needle is connected , which shows the barometer readings in milibars or hectopascals projected on a graduated circular card. The thin metal chamber has elastic properties , when atmospheric pressure increases this chamber gets compressed , when atmospheric pressure decreases , the chamber gets expanded , this inward and out ward movement of the chamber acts on the needle mechanically and the needle then registers a reading on the graduated card. The accuracy of the reading depends upon the size of the metal chamber , if the chamber is large , accuracy will be better.

Compared with the mercury-in-glass barometer, the aneroid barometer has the following advantages:

d.       may be easily adapted to give a recording trace.

The type of aneroid barometer most commonly seen is that which looks rather like a clock and is found in the home and on board ships not issued with equipment by the Met.Office.

The barometer is made up of:

a.       the 'aneroid capsule' or 'sensitive element', which is a thin-walled disc with corrugated faces. There is a partial vacum inside, but some dry inert gas remains.

b.       a strong spring which prevents the capsule collapsing under the pressure of the atmosphere.

c.       a long lever, which transmits the movement of the capsule face and the spring.

d.       a connecting lever that transmits this movement to turn the rocking arm (5).

e.       a projecting arm pulls on, or slackens off, the chain (8), which is wound around the pulley (9), on the spindle. The pointer is attached to the end of the spindle.

f.       a hairspring, which takes up the slack in the chain when the projecting arm (6) moves towards the spindle.

1.       Errors due to parallax when reading. Read when facing square on to the barometer.

2.       No temperature correction is required within the normal operating range due to the use of a bimetallic link in the lever-system and by insertion of a calculated quantity of inert gas into the capsule during manufacture.

3.       Correction due to varying height. Reading must be reduced to sea level.

4.       Errors due to gusts and draughts. The barometer must be suitably sighted to avoid sudden increases in air pressure.

5.       Correction due to calibration. With the passage of time and the many changes in pressure it experiences, the capsule may not return to its original shape. This effect is known as 'hysteresis'. 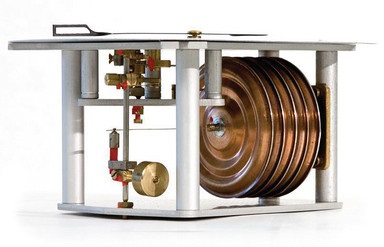 The precision aneroid barometer is made of:-

The barometer should be mounted about 1.5 metres above the deck preferably on a fore-and-aft bulkhead.

The method of reading the barometer is as follows:-

a.       if the thread of light in the indicator is continuous, the pressure reading increases until the thread just breaks.

b.       if the thread of light in the indicator is broken, the pressure reading decreases until the thread just becomes continuous.

3.       Reverse and repeat the process in 2 above, taking care not to overshoot, and stop when the thread of light just breaks.

4.       Release the button and read off the pressure from the read-out. If the tenths reading is equally between two figures, the odd number should be taken.

6.      The only maintenance required is to change the battery at intervals of some 6 months or when the thread becomes dim or difficult to read.

How to calibarate aneroid barometer:

The barograph is similar in principle to an aneroid barometer, but instead of a pointer moving over a dial, the movement of the capsule moves a recording pen over a chart mounted on a revolving drum. Further modifications are required to produce an instrument suitable for use at sea. The purpose of the barograph is to produce a continuous, permanent record of the atmospheric pressure between readings of the barometer and, more importantly, it enables the observer to see the barometric pressure tendency at a glance.

The barographs originally used were found, when taken to sea, to have too-crowded a scale for accurate observations. The instrument was therefore redesigned to give an open scale. This was achieved by:

a.       using either a bellows type capsule with an internal spring or a stack of some 5 capsules. Both of these types will multiply the movement resulting from pressure changes.

b.       having a pen arm as long as is conveniently possible.

c.       the lever system between the capsule and the pen arm multiplying the capsule movement.

It was further found that the trace produced was widened out into a band covering several millibars on the scale. This was the result of:

b.       short-lasting pressure changes due to gusts of wind.

c.       oscillations in pressure as the ship rose and fell in heavy seas.

d.       angular accelerations as the ship rolled and pitched.

These problems were largely (but not entirely) overcome by mounting the instrument on thick foam rubber mountings and by the use of oil damping around the capsule.

The barograph consists of two units, the aneroid capsule with the magnifying levers, and the drum carrying the chart.

The capsule is mounted vertically in an oil-filled brass cylinder, and fixed firmly to the base. The cylinder is sealed except for a small space around the rod from the capsule to the lever system. Above this hole is a small reservoir, partly filled with more oil. Any change in air pressure will cause oil to flow through the gap, but the oil used has a viscosity that will only let it

The lever system causes the pen arm to rotate up and down about a horizontal axis. The radius of the lines marking the hours on the trace is the same as the length of the pen arm. The modern type of pen used in barographs is a 'felt tip’ that should last for a year.

The paper trace, or barogram, is fixed to a vertical brass cylinder that is driven round by clockwork, revolving once every 7 days. The barograph scale is normally from 950mb to 1050mb but it is possible to reset the instrument so that the central pressure on the scale is as low as 880mb. This operation may be necessary in Tropical Revolving Storms or in intense mid-latitude depressions. Resetting is done by turning the milled knob on the gallows above the capsule.

The barograph should be installed horizontally on foam mountings on a rigid surface. It should be protected from excessive vibration, direct sunlight, local heat sources and gusts.

If the reading of the pressure at one instant is required the instrument may be given a light tap but not prior to an observation of tendency.

The drum is wound once a week and the paper chart is replaced at the same time. It is suggested that this be done at the same time each week. Once the new chart is secured the pen is set at the correct day and GMT.

As the barograph is intended to provide only a record of the tendency, and not an absolute value, of the atmospheric pressure over a relatively short period, great accuracy is not required. Therefore no correction or adjustment need be made for it.